Brass for Africa – a reflection

They say you should never meet your heroes. I thought about this last week in Cheltenham Town Hall as I listened to Wynton Marsalis warm up then watched him, Alison Balsom and Guy Barker take their places in the 3rd cornet section for the Gloucestershire Youth Brass Band/Brass for Africa concert on 13th July.

But I had met my heroes – and they were amazing; more than I could have wished for

I had met my heroes – and they were inspiring and generous

I had met my heroes – and they were not Marsalis, Balsom and Barker.

They were Julius, Tadeo and Micheal (sic); Gilbert, Sharon and Ivan; Best, Disan and Julius; Sumayya, Bruce and Emmanuel.

These Ugandan musicians and their committed, intelligent and driven leaders, Jim Trott and Lizzie Burrowes, blew me away (almost literally in the case of Julius Bass Trombone!!) They warmed my heart with their approach to music and their total belief in its transformative powers. A belief forged in poverty and struggle in the slums, orphanages and youth prisons of Kampala.

We met them first in an innocuous church hall in Cheltenham. Their introductory song to us spoke of their belief and started the GYBB young musicians on their short journey on a very fast machine (with apologies to John Adams!).

Music! Music my saviour! I love music, of course I DO DO DO!!

We learned the song in a very short time and, over the hours we spent together I think we all began to learn that these were more than jolly words chosen for their scansion. Our young musicians looked slightly reticent, to say the least, as our African guests introduced themselves with fun, vigour and some pretty fancy dance moves! But it didn’t take long for them to embrace the power of music and to prove, as Jim said, that “no-one has ever died of embarrassment!”

Our first two hours together flashed by and the transformation in our students was obvious and wonderful. Normally quite reserved students left the rehearsal beaming, high fiving and, yes, dancing! “That was just amazing! Those two hours went so fast!” said one saucer-eyed cornet player, with sheer delight etched on her face.

The minute details of our two rehearsals won’t make interesting reading to anyone not present. Suffice to say that rarely have I seen a bunch of young musicians sit up and take notice, real notice, of what’s being said and being asked of them. That, I suspect, is often the case with Alan Fernie in the middle! A no nonsense approach, with which I fully concur, focussed minds but also showed musicians just how much they can learn and admire in a short time frame.

We heard the stories behind some of the music played – Kabalagala we now know is an area of Kampala with bars, restaurants and night life, so there’s no legato, no long notes and lots of energy required to convey this to your audience. And when the composer says “I didn’t write that, I wrote this” one was reminded of Bernstein conducting the recording of West Side Story all those years ago!!

Thula Baba is a traditional lullaby sung by Ugandan mothers to their children. Sharon, a baritone player and a fantastic marching snare drummer, told us that it is a song she used to sing to her baby. She also told us that she is a single mother who used to be afraid of boys, was very shy in their presence and only thought of them as someone who might “seed her a baby”. Now she sees them as her colleagues in the band and as real friends and brothers. Music has taught her to trust people. Hearing that story from a slightly built but strong natured young woman gave the music we played such a powerful addition of soul and meaning that it transformed a simple lullaby into a song for young women everywhere.

Things weren’t all serious and “worthy” throughout this process and I don’t mean to paint a picture of musical “do-goodyness”, because this coming together (or ceilidh as Alan and I might have it) was so much more than that.

As friendships and trust developed as we played, so did our understanding of each other and how we could really make this concert special. Then we discovered something that I think pulled us all up short. ABBA are huge in Kampala!! Who knew?! Everyone loves a bit of the super Swedes and it would seem that the Ugandans are no different, so ABBA Gold it was, arranged by Alan Fernie of course!

Saturday 13th (my birthday as it happened) saw us back in the same church hall where the magic had begun the previous week. We had been joined by a few more GYBB players; a few more Gloucestershire Music and BfA colleagues; and the BBb Bass sensation that is Sumayya! Her visa had been approved at the very last minute and now she was here! As a BBb player myself, I understand that it’s not always a person’s true instrument of choice, but that we all pretend we always wanted to play it. But Sumayya has changed all that! Standing at maybe 5’ 3” in her bare feet and weighing about the same as her tuba, she swings it round like it’s a soprano cornet. Never again will I accept the groans and grumbles of your standard sized tuba player that it’s unfair for them to have to march or stand for any length of time. Instead I will invoke the Sumayya Law that states “a tuba decreases in weight and cumbersome-ness in inverse proportion to the smile and enthusiasm of the player”!

If Sumayya broke down stereotypes of tuba players, Tadeo just changed the rules on everything.

As a 1 week old infant, Tadeo had been horrifically burned in a fire and lost both his hands and suffered serious burns to his legs. Brass for Africa, he told us, had changed his life, given him hope and taught him resilience. Anything is possible is his mantra. I now firmly believe this having watched him play alto trombone (yes, trombone – with no hands!) in the horn section and then a solo, Hope, written for him by Alan Fernie. Adversity doesn’t often come with darker form than that faced by Tadeo but, playing his solo in front of a full Cheltenham Town Hall, he made us all believe a little more that there was light at the end of even the darkest tunnel.

As brass band line ups go, what we had onstage at the Town Hall for our final rehearsal was a little unconventional. Of our 8 trombone players, only 2 read treble clef (thank you Sibelius!), we had an alto trombone in the horn section and a cornet section covering three rows. My main concern for the cornet section was in the 3rds. They all read well and played accurately but I was disappointed to see not one, but two trumpets on show. As an old traditionalist, I felt I should address this anomaly that would have seen us removed from many a contest. That I chose not to is less a testament to my flexibility and more to the fact that the offending instruments were in the hands of Wynton Marsalis and Alison Balsom, with two becoming three in the concert with the addition of Guy Barker! Now that’s not a bad back row in anyone’s book!

Wynton had generously joined us after his own sound check to run through the final big number of our set, Kampala. With an open section for solos in the middle (brass band purists need read no further) Wynton, Alan Fernie, BfA’s principal trombone, Julius and GYBB’s flugel player, Matt, all took choruses. Listening to Wynton and Julius swapping 4s was probably the highlight of the rehearsal! Wynton then very graciously took time to chat a bit to the band. Having more people onstage isn’t an excuse to play louder, but to play more quietly and listen more, he told his eager audience. When we’re playing with people we may not know so well, we have to listen harder to “get it together”. Our percussion section were then given a fairly in-depth sectional on how to “get it” with each other to drive the rest of the band.

More than one of our players sat with mouths open and eyes perhaps just a touch moist as this trumpet god gave of his wisdom not two feet away from them!

Education was such a crucial and integral part of this whole experience – and not always with a capital E. I felt that we all learned a lot from each other, as well as the more directed learning from the conductors to the players, culminating in a true music legend pointing these young players in the right direction for improving their musical performances, and just maybe adding to their life skills – listen a bit more and don’t always be so loud about things. That way we’ll get it together more. Not a bad maxim for life and something perhaps some of our politicians could learn from! Those same politicians could also learn much from the excited, exuberant faces of the primary school children who greeted the Brass for Africa players after their short session to end a morning’s music making at Cheltenham Town Hall on Friday. Every one of those children had been introduced to something new that day. An attitude that said anything is possible and music goes a long way to making it so. One may not be able to count it, or say how much it “costs”, but boy is it valuable!

As for me, the concert flashed past and was over too soon. My heroes had played, told their stories and won the hearts of their audiences and fellow musicians.

Oh, and Wynton Marsalis played happy birthday to me, apologised for it not being very good but he was tired, and then he was gone. He’s a bit heroic too!

During the last week of July 2019 Gloucestershire Music embarked on a five day tour of Belgium with young musicians from around the county. The orchestra kicked off their first performance in Ostend with an incredible performance of music from ‘The Incredibles’ basked in beautiful Belgian sunshine and cold water in hand. During the days that followed we visited Brussels Musical Instrument Museum, visited Gent and held concerts in Bruges, Kortrijk and Ypres with a memorable performance of ‘I Vow to Thee’ and ‘Dear Lord and Father’ during the last post ceremony at the Menin Gate. The Menin Gate performance struck a chord with our respectful musicians as we had visited Tyne Cot cemetery and the Flanders Fields museum earlier that day. We are so proud of the standard of musicianship shown and now we’re going to cool down after some astonishing temperatures. 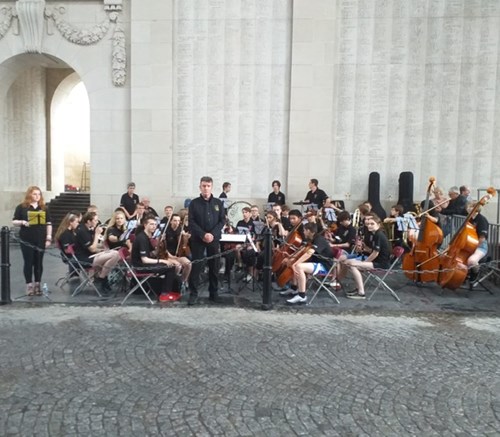 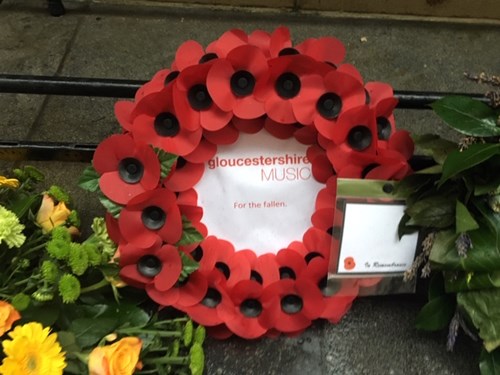 After the excitement of our musicians performing in the Massed Ensemble at the 2016 Music for Youth Prom at the Royal Albert Hall, GYJO were invited to perform in the final platform on 15th November.  Read more in our blog

Over 200 County musicians perform at the Royal Albert Hall

At 9:00 on Monday 14th November 2016 over 200 young singers and instrumentalists from around Gloucestershire were eagerly boarding their coaches to take them to the iconic Royal Albert Hall in London for their performance at the Music For Youth Proms 2016.

Read more in our blog